OK, as some might remember I have previously had a couple of pics showing Rjukans firebrigade in the erly twenties where they used a bunch of Indians.

I got the photo included in this post from Bjørn Andre who is currently restoring the Spanjola (remember the post?, this was a home made superbike with a V 4 engine based on two Indian Power Plusses). This bike was constructed by an engineer working at the Hydro plant at Rjukan. The Vemork Hydro plant is where the Germans produced the "heavy water" trying to get the nuclear bomb to finnish of the WWII. Those plans where ruined by some Norwegian saboteers and in 1965 a film was made, "Heroes of Telemark" by Anthony Mann where Kirk Douglas was the main actor. 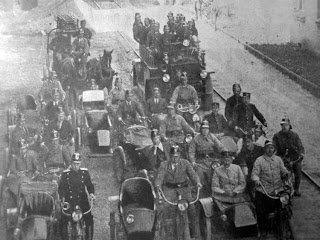 This picture was taken during "the great strike" among workers in
Norway in 1921. Most of the Rjukan firemen was at strike.
The "firemen" in the picture where mostly men in high positions at
the Hydro plant. Those who had motorcycles was called in for fire
duty. At the time the Rjukan fire brigade had four motor vehicles;
three Indians H-338, H-339 and H-382 and a FWD fire truck
(see picture above). H-338 and H-339 was bought in 1919, H-382 and
the FWD the following year. The fire truck body of the FWD was made,
and the Indians was modified for fire equipment in Rjukan.
The XXL motorcycle "Spanjola" was in the making in these
surrounding buildings at the time.

Thanks a lot Bjørn Andre, and good luck in your progress with the Spanjola.
Lagt inn av American motorcycles kl. 15:20