This is one cool bike, a mighty Thor, named after the Viking`s god of thunder. Those impressive Thor`s where finnished in a flashy blue colour when leaving the Aurora Automatic Machinery Manufacturing plant in Cicago Ill. Thors where quite popular in Norway where two models was supplied. Namely the U-12, "Giant twin master of Heavy Duty" powered by a strong V-twin with enclosed inlet valves when other makes still where open to face dirt and gravel from the roads passed, and the V-6 "Light Twin Up to the minute" with a less sophisticated twin engine with exposed inlet valves.
This particular Thor in the picture is a model U-12, once operated in the eastern parts of Norway and rebuilt with a state of the art Cygnet rear carrier, quite popular in the late teens and early twenties but rare as hens theets today.
The owner of C-2464 carries his wife, two children and inlaws? in the Cygnet, man did this Thor have to live up to his reputation as a strong workhorse feed by oil and gasoline or as stated by the factory; "Giant twin master of Heavy Duty".
According to official history THOR`s production ended after the 1920 season, but THOR`s where still to be sold in Norway for some years by the company Horne & Børresen A/S in Kristiania, most likely unsold machines from the last years of production.
The Aurora factory continued for years to produce equipment such as pneumatic power tools and even electric hand drills. Those products still carryied the manufacturers logo THOR as did their once famous motorbike. 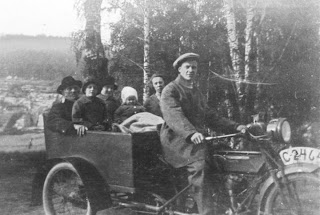 There is not much infor on the Thors availiable on the www, but this is a god source for info, though the site seems to have not been updated for years;
http://209.204.252.20/thorhistory.htm
Copy and paste this link into your web browser to check it out.
Lagt inn av American motorcycles kl. 18:23