Pierce Four "The vibrationless motorcycle". Introduced in 1909, the Pierce four was strongly influated by the FN four introduced 4 years earlier to eager motorcyclists in a growing market by Fabrique National in Belgium.

Pierce where well known for their quality products, but the Pierce four motorcycle did allso get famous for its high price, 400USD when introduced when it hit the market in 09.
This tiny four had a displacement of 42,5" /696cc, sidevalve exhaust valves and atmospheric inlets operated by the vacum of the breathing engine only. Chain for bicycling only, engine got the rearwheel spinning by a enclosed driveshaft. A two speed gearbox and an automatic clutch was added to the bike in 1910. Its price was its worst enemy, and production ceased as early as in 1913. Hence a Pierce four is as rare as hens theets today, or maybe even more? 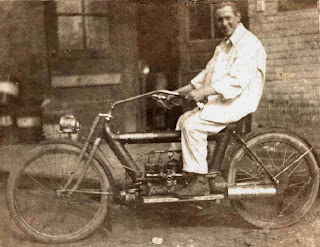 The bike captured is a 1910-11ìsh Pierce that lived its life in Denmark. Someone have been playing with it as a rebuilt inlet manifoild have moved the carb from behind the rear cylinder to the middle of the engine side, facing the photographer. Some pretty huge footbords have been added too ease the comfort of the driver, wich under normal circumstanses would have been driving resting his feets on the "bicycle" pedals. 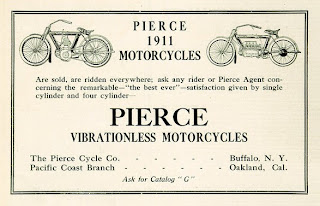